Monet with a Side of Mash – A New Form of Protest

What happens when food is used by activists fighting against climate change?

Food and painting have long been an appetizing combination in the history of art. Commonly portrayed in works of the Renaissance and Baroque periods, such as Caravaggio’s decadent still lifes and Giuseppe Arcimboldo’s composite heads of fruits, vegetables, fish, and plants, food continues to be a frequent subject of portrayal well into the Modern and contemporary eras. Lavish depictions of banquets and exotic specimens from foreign lands in pre-19th-century art stood as a symbol of copiousness and wealth. In recent times, food has adopted different meanings, symbolizing reckless consumerism or the transience and fragility of human life, as seen, for example, in Francis Bacon’s paintings of meat carcasses and James Rosenquist’s enlargements of pasta dishes and canned products.

What does it mean, however, when food is used as an instrument of protest in the context of art?

Two environmental activists from Letzte Generation threw mashed potatoes at Haystacks, a work by Impressionist artist Claude Monet, which had sold for a mind-boggling $110.7 million at an auction in 2019. The stunt occurred on October 22 at a Potsdam fine art museum, in Germany. The perpetrators were investigated for property damage and trespassing and the painting, hidden behind a layer of protective glass, remained unscathed.

Letzte Generation (which translates as ‘The Last Generation’) is a German-Austrian organization that promotes environmental causes through acts of civil disobedience. Their aim is to push for drastic measures against the disastrous effects of climate change and global warming. In an open letter to the federal government, posted on their website, the protesters claimed they would “provide maximum public disturbance from 10.10.2022,” if the authorities failed to meet their demands.

Concerns were raised about alarmingly hot temperatures in Europe–especially this past summer–natural disasters, such as fires and floods, occurring in regions never before affected by such calamities, as well as groundwater contamination and reduction due to infiltrations of seawater. These recent disruptions in weather patterns are bound to bring forth droughts, famine, and eventually wars, as soils get depleted and populations fight over the control of natural resources. “If you put decisive action against climate collapse on the back burner for just two to three more years, it will be too late,” the group forebodes. 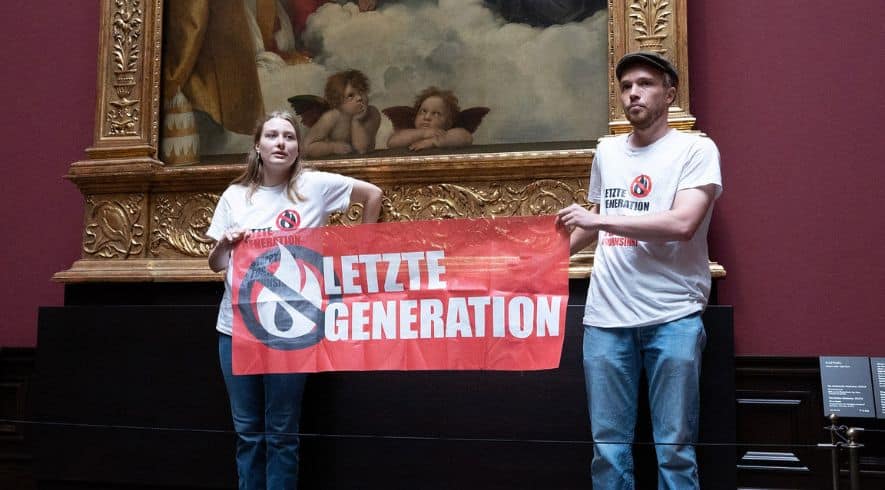 In the face of climate catastrophe, the protesters ask the authorities to make radical efforts to limit global warming to 1.5 degrees Celsius, as stipulated by the Paris Agreement, a legally binding international treaty on climate change signed in 2015 by 197 countries. Among their requests are the introduction of a 100 km/h-speed limit on German highways–where there is currently none–and affordable public transportation.

“People are starving, people are freezing, people are dying,” one of the activists pleaded in a video tweeted by Letzte Generation. “We are in a climate catastrophe and all you are afraid of is tomato soup or mashed potatoes on a painting. Do you know what I’m afraid of? I’m afraid because science tells us that we won’t be able to feed our families in 2050,” another protester said.

The incident occurred only nine days following the dousing of Van Gogh’s Sunflowers with tomato soup at the London National Gallery by another environmental organization, Just Stop Oil, and a few months after climate activists glued their hands to masterpieces by Sandro Botticelli, Nicolas Poussin, Rubens, and Cranach, in art institutions in Florence, Italy, and all across Germany.

Acts of disobedience at museums are hardly new. In 1914 Mary Raleigh Richardson, a Canadian suffragette active in the women’s suffrage movement in the United Kingdom, sliced Diego Velazquez’s The Rokeby Venus at the London National Gallery to protest against the incarceration of fellow activist Emmeline Pankhurst. “Slasher Mary,” as the press dubbed her, later said, “I have tried to destroy the picture of the most beautiful woman in mythological history as a protest against the Government for destroying Mrs. Pankhurst, who is the most beautiful character in modern history.”

Similarly, Pablo Picasso’s Guernica became the victim of one such attack during the Vietnam War, when Iranian artist Tony Shafrazi sprayed the words “Kill Lies All” with red paint at New York’s Museum of Modern Art. In 1997 Russian performance artist Alexander Brener painted a green dollar sign on Kazimir Malevich’s painting Suprematisme at the Stedelijk Museum of Modern Art, in Amsterdam. He chose the dollar as a symbol of trade and merchandise to protest against corruption in the commercial art world.

But why food and why on a work of art?

The goal is partly to draw a parallel between two categories that sit at opposite ends of the spectrum with regard to society. Food is a means of sustenance that is essential to the survival of human, animal, and plant species; while art is regarded as added value, a luxury existing purely for our own entertainment and delight. By bringing the two together, protesters hope to shed light on the absurdity of societal priorities. “What is worth more, art or life?” one of the London activists clamored. “Are you more concerned about the protection of a painting or the protection of our planet?”

When we look at a beautiful piece of art, we instinctively want to protect it. We recognize its worth. By deviling such works of exceptional beauty, climate activists hope to inspire people to treasure the most priceless resource we have at our disposal on this Earth: food. The rationale behind their actions is that, as precious as these paintings may be, we cannot feed our children with oil and turpentine, and if governments don’t take the necessary steps to rein in the dire consequences of global warming, we may be in for a very hard spell ahead.

The overarching agenda, however, is to capture the world’s attention through unconventional methods and direct it to what really matters. When interviewed a day after appearing in court, Phoebe Plummer, one of the London protesters explained “I recognize that it looks like a slightly ridiculous action,” she conceded. “But we’re not asking the question if everyone should be throwing soup on paintings. What we’re doing is getting the conversation going so we can ask the questions that matter.”

How successful these types of actions are remains yet to be seen. The international media hype generated after each incident is effective in grabbing the immediate attention of the public and the authorities. Ultimately, however, radical and disruptive practices may prove inadequate for building communities and power in the long-term.

Need some specific advice regarding your art collection or help in starting afresh? Benefit from our curatorial services! To know more, contact us at [email protected]

The protesters claim they mean no harm to the artworks and avoid damage by carefully gluing themselves to the sides of the picture frames. Ultimately, the paintings suffered no loss. They were repaired, cleaned up, and restored to their rightful places. The conversation and general anxiety about climate change, however, does not stop there; neither does the fight. In an interview with Frieze, Plummer stated “We’re currently in civil resistance against our government […] continuing onwards every single day, we’re going to perform acts of civil resistance against our government and we’re going to disrupt everywhere in London, every day until they meet our demand of no new oil.”