Traditional media such as drawing, painting, and sculpture could be giving way to powerful new technical means, which in the hands of very adept MFA students, is changing the nature of art.

One topic in the art world is how art, or the definition of Art, is rapidly changing due to the introduction of high technology. Traditional media such as drawing, painting and sculpture could be giving way to powerful new technical means, such as 3-D printing, photo media and video which in the hands of very adept MFA students, is changing the nature of art as we know it. I asked Jamie Walker, Director of the University of Washington’s School of Art how traditionally trained faculty are adjusting to all these changes and are they catching up or being left behind? How can they advise today’s students in this new world? He told me some UW faculty have transitioned already, citing a drawing and painting teacher learning video and photo media, for example. 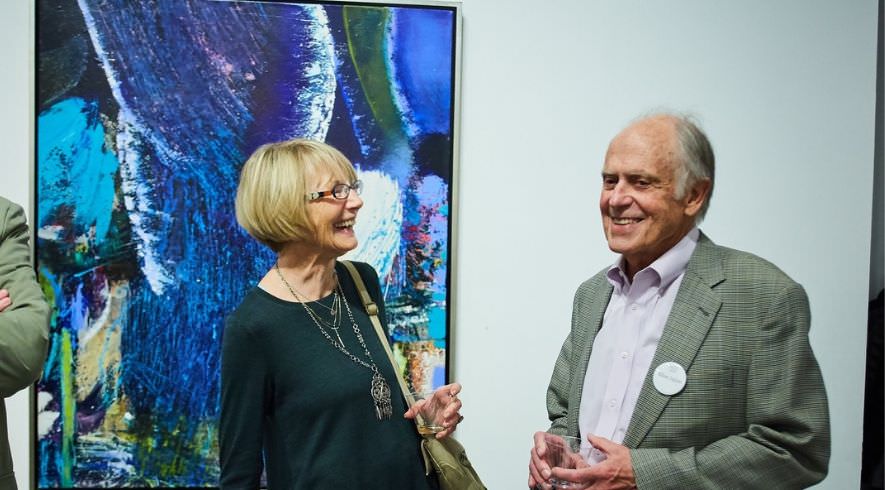 Years ago, art-making was a time consuming and intensive commitment which offered myriad challenges as anyone whose struggled with paints, brushes, and canvasses know well. Professor Walker, a ceramicist himself, spoke of the skill it took to “throw a pot”, a learned skill involving lots of practice. Nowadays, students can access 3-D printers to make a ceramic or at least a model for one.

Does this leave painting and drawing and ceramics disadvantaged as too arduous in this new tech world? Could it be a case where faster and faster feedback loops in our highly connected internet world, encourage a more intense immediacy only video screens can deliver? I asked him if the University had any role in preserving traditional media. He answered me that the UW is a “research university” meaning that it encourages changes, even radical change because that is what is attracting students from different backgrounds. And, of course, the students are the future. And while clay, stone, paints, metal, wood and other older substances used for art offered their own
challenges to be molded by human effort, students today must tussle with the complexities and technical difficulties of a completely different kind. So while art changes, it can’t be any easier just because we have computers. It’s just different.

But what’s different now, if the work in the 2018 MFA Show is any example, are works which exhibit cerebral calculation, spareness, conceptualness, neatness and a cool perfectionism? Sometimes with little left to change, many are accompanied by explanatory texts which supposedly explain the artist’s intent, usually addressing an artmaking issue of interest. One was a visual presentation of a painting’s stages of development image by image flashing around on a video screen. But don’t we view and judge paintings as statements and finality unto themselves? But that is how art is changing. Its as though recording the artistic process can be a subject for art.

I received my MFA degree in 1972, a vastly different time. There weren’t any computers, cellphones, iPads, etc. It was all traditional media. The late 1960s and early 70s were a tumultuous time, with anti-Vietnam protests, strong anti-government feelings, but also high music creativity, such as the Beatles. In this tumultuous scenario, art served a different purpose, and Abstract Expressionism became a vehicle of self-expression. A pantheon of master painter “heros” such as DeKooning, Jackson Pollack, Clifford Still, Sam Francis, and Richard Diebenkorn still dominated the art world, giving us inspiration and direction. I studied their paintings and drawings and visited museums to see their work. It also was the era where formal values, especially the view that line, form and color far outweighed subject matter in importance. It was the formal values which conveyed artistic meaning, not the
subject being portrayed. I was particularly impressed by Rudolf Arnheim’s “Art and Visual Perception” book and his theories on design and color. In 1969, the University of Washington’s School of Art encouraged me to enter its graduate school which I did and learned quickly that it wasn’t how well you painted or a chosen style of work that mattered, it was how strongly you pushed yourself into new areas, to achieve results far beyond what you could have imagined. And indeed that was the mandate.

I continued painting figuratively, with loose expressionist interpretations of landscapes and the figures,
modeled out of Diebenkorn and James McGarrell, finding new ways to fuse landscape elements into overall compositions, as in this painting “Landscape Open” from 1970. But it wasn’t until 2 years later that I created my “breakthrough” painting, “With Alizarin“ 87” by 82“, stirred by a trip to Spain and seeing the works of Goya at the Prado Museum. Here all real-world references are subordinated to a highly energized paint handling, trowelling and large swaths of oil paint which had the figure almost completely disappearing! 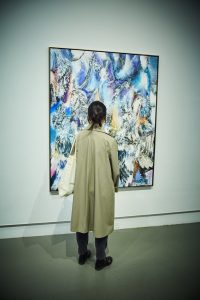 After graduate school, I continued painting more along the lines of Color Field which began to replace Abstract Expressionism, with looser paint handling such as pouring, spattering, and splashing paint creating new imagery, and new experimental paths to explore. Not that I abandoned figurative work completely, I was too “sculptural” to do that. But without any conscious design approach or pre-determined plan, the imagery came from these spontaneous paint gestures suggesting new combinations I was relishing to explore. My life as a hiker, sailor, and skier in the Pacific Northwest imbued me with natural imagery, which I indirectly referenced, as in this painting “Tango” from the early 80’s, all created as the canvas lay prone on the floor. I mixed up a batch of teal and ultramarine blue spreading it around with a large hardware store brush and lots of medium.

Because I was working in a smaller studio, I had to leave it for a couple of days to dry. I then returned and “splashed in” the lower white area, reminiscent of roiling surf breaking on the beach. As long as I painted faster than the conscious mind trying to make sense of it, good things seemed to happen.

One can easily see the “bi-coastal” influences in my work: the New York Abstract Expressionist element, and the Bay Area figurative works of Diebenkorn, Park, and Clifford Still. The nature references are entirely Northwest and are uniquely my own. But what about drawing, and those classical, formal aspects, that long tradition? Would there be a merging of the two? As you can see in this drawing entitled “Wind In Cedars” erasures, smudges, redraws and
twisting fronds agitate the trees in a turbulent flux. Here the technique suits the subject mimicking the action of the wind through the branches.

This has been the course of my work over the last decade or so. I have done a number of tree paintings which meld the drawing and structural aspect with the loose expressionist paint handling. It would be useful to mention that one new area was my snow paintings which are entirely original. This particular work shows how I combine the expressionist painting with realistic touches of snow into a swirling entanglement of tree branches.

So how exactly do I go about doing this? Isn’t a lot left to chance? I have no trade secrets, but often compare painting to a type of struggle, mind over matter, taming the bull, conquering the mountain, a challenge demanding all I have. Every painting worth the effort has gone through at least one crisis in its making if not many. It is the beginning which is exceedingly critical, which I can describe this way:

I put enormous emphasis on bold technique to push the painting forward, whipping a loaded paintbrush in arcs and swirls, lines and curves to get it “off the ground” disregarding sentiment and looks. This bold initiation sets up clashes and conflicts, just what I want. Working out from black, colors splash in adding to the mix, but as I achieve a critical mass. The painting, contorted and confounding to the eye suggests to me a way forward, which may
mean editing and directing lines of forces towards consolidation.

The painting’s energy level at this point is high, and I must keep it high if it’s going to succeed. The price of throwing caution to the winds is chaotic, but the trick is to bring the painting back from the edge of chaos, without losing its energy. Then I can add touches of snow, touches of love to the branches, softening it, cooling it down to the right solution. Paintings tend to grow away from you as they develop, they begin to have their own personality. They may say “more” or “enough” to me in their own way. They are a lot like children, some are a breeze to raise, and others, well, every parent knows what I mean. I’m often asked, “when do you know the painting’s finished?” That’s difficult and requires putting it away for a while so I can take it out with fresh eyes and decide then and there; if there’s no point in embellishing it or continuing, I let it go.

Whether you are looking for the perfect gift for a loved one, need to impress a colleague, or want to give a friend something they will always remember you by, you will find the just the right piece on ARTmine. Need help? Contact us at [email protected]

The answer lies in my belief that when one looks at an artwork, one should feel a “lift”, you should sense its energy. That is the important thing. The highest value in art is originality, and that is what I’ve striven to do; sometimes falling short, but always believing, as Mark Rothko once wrote that paintings should be miraculous and that it’s the artist’s highest calling, through years of studio practice, to “perform miracles when they are needed”.

William Ingham‘s paintings are in over 40 corporate settings, and numerous private art and museum collections, including the Seattle Art Museum, Whatcom County Museum of History and Art, the Tacoma Art Museum and the Colby College Museum of Art. He has been a visiting teacher at the University of Washington, serves on its School Of Art advisory board and lectured at the Colby College Museum of Art as well as a former trustee of Cornish College of the Arts. He has been a regular contributor of art to PONCHO and other charitable organizations in the Northwest. The artist is represented by Agora Gallery and his works are available for sale on his ARTmine page.