Alternative art spaces: (Looking for) Art off the Beaten Track

Venturing further afield to explore the full spectrum of what artists have to offer, from the gallery to the bottom of the sea.

Art galleries and museums are powerful institutions, able to determine the very modalities of seeing and structure our relationship with the artwork, but alternative art spaces have gained more importance recently. It is only fair that contemporary artists often like to draw our attention to the exhibition space as more than an inert repository of art. Certainly, galleries and museums themselves are hyperaware of their power to affect how we experience art. In recent years, exhibition design has become progressively more experimental and exciting. And, needless to say, nothing can replace the invaluable services that galleries and museums provide to artists and the general public. 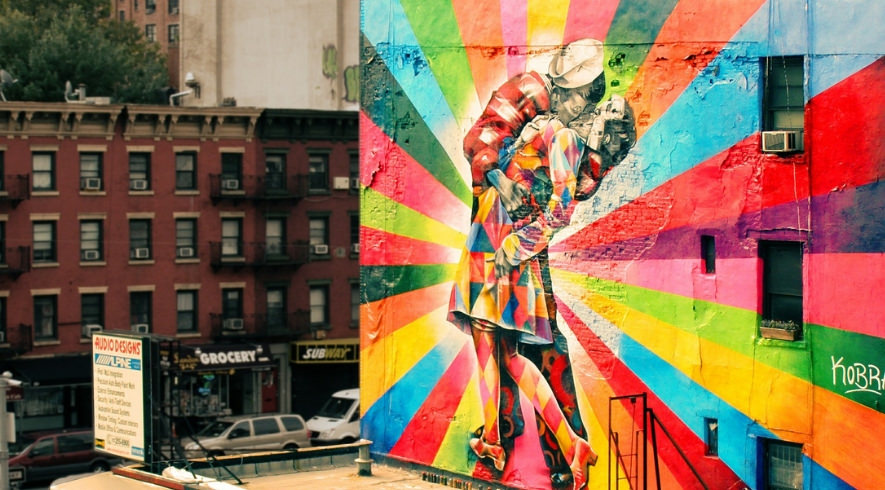 Still, since the times when Academies and Salons presided over the arts, artists have gone beyond their limitations and organized alternative exhibitions. Today, installation, performance and video art, large-scale two-dimensional works, etc., frequently aspire to provoke, subvert, and question the status quo. As art strives to push us beyond our comfort zone, and as it brings the exhibition space itself under scrutiny, it sometimes pushes us out of the gallery or museum into some rather strange places.

Where and how art is displayed plays a crucial role in how we as viewers experience the work itself. Consider the difference between the French Salon as rendered by François-Joseph Heim in his 1827 painting “Charles X Distributing Awards to Artists Exhibiting at the Salon of 1824 du Louvre” and the 1959 interior of Frank Lloyd Wright’s Guggenheim Museum. The contrast is telling: Heim depicts a multitude of paintings in heavy frames covering the walls from floor to ceiling. In this saturated space the images overwhelm the eye as they compete with one another. This competition, in fact, is the point of the Salon. But as paintings vie for attention, they also create a homogenous decorative mass.

The 19th-century viewers would understand the system that determines the placements of specific artworks according to subject matter and artist’s cachet much better than we do today. But what would they say about Wright’s inverted ziggurat? This minimalist masterpiece aspires to the status of a temple of art whose form is intended to function as an organic whole that enhances the viewer’s experience of each individual artwork. For the quintessential Modernist architect, art is a spiritual experience so important that it may have replaced actual religion.

Today, we are used to seeing art in the so-called “white cube” — a pristine, quiet room with white walls. Intended to provide the optimal viewing experience, this kind of space first became fashionable in Germany in the 1930s, though the Bauhaus and the Russian Constructivists set the precedent somewhat earlier. The white interior entered the art world in earnest in 1939, when New York’s Museum of Modern Art moved into its new building on 53rd street. With its glassy façade and smaller gallery spaces inside, MoMA fashioned its white décor on the department store. While nothing was to distract the viewers from the art on the walls, nothing could obscure its new status as a commercial product.

By the 1950s white became the standard in galleries and museums in the West, and by the 1970s artists and art critics were engaged in a critique of this new paradigm as a sterile “white cube.” In 1976 the art critic Brian O’Doherty coined this term when he published a series of essays entitled “Inside the White Cube” in Artforum magazine. In the opening paragraphs of the essay ‘Notes on the Gallery Space” O’Doherty wrote: “A gallery is constructed along laws as rigorous as those for building a medieval church. The outside world must not come in, so windows are usually sealed off. Walls are painted white. The ceiling becomes the source of light. The wooden floor is polished so that you click along clinically, or carpeted so that you pad soundlessly, resting the feet while the eyes have at the wall. <…> Unshadowed, white, clean, artificial – the space is devoted to the technology of esthetics. <…> The space offers the thought that while eyes and minds are welcome, space-occupying bodies are not.”

O’Doherty’s critique points to the disembodied nature of the art-viewing experience. According to him, art in a “white cube” is isolated from the totality of life, disincarnate, lacking in vitality. Aptly, predating O’Doherty’s essay by just a few years, artist Gordon Matta-Clark and some friends addressed this very issue when they opened FOOD: a restaurant and artist cooperative in the still very rundown NYC neighborhood of Soho. Matta-Clark, soon to be known for transforming derelict architectural sites into glorious works of art, experimented with his architectural “cutting” for the first time in its interior. FOOD was more than a restaurant. It was a performance space that hosted FLUXUS, among other notable actors on the art scene. Here, artists took turns cooking meals for the public, and preparation and consumption of food were put on display to be enjoyed as art. Matta-Clark also drew a great deal of attention among the artsy crowd when he staged a pig roast under the Brooklyn Bridge. What were these carnivalesque celebrations of the corporeal if not a reaction to the reverent sterility of the “white cube”? Matta-Clark was, among other things, a student of alchemy. For him, the spiritual temple of art was inaccessible except by way of somatic reality.

While some artists leave the “white cube” as an act of rebellion, others seek different types of spaces because they add something to their artwork. In recent times a few of the most widely known contemporary artists exhibited their work in Reading Prison: a decommissioned Victorian jail famous for having once counted Oscar Wilde as one of its prisoners. Now an art space, Reading hosted Nan Goldin, Marlene Dumas, Patti Smith, and Ai Weiwei, among others, in an exhibit that addresses themes of isolation, imprisonment, and censorship.

A remarkable example of a highly unconventional site for an exhibition is Jason deCaires Taylor’s M.U.S.A: an underwater sculpture museum between the coast of Cancun and Isla Mujeres. Taylor creates impressive installations that contribute to marine conservation by doubling as coral reefs. To experience this installation firsthand the viewer must travel to the bottom of the sea, temporarily inhabiting another world altogether. Taylor is an environmentalist as well as an artist. His sculptures are intended to not only attract viewers for their own sake but draw them away from the endangered coral reefs nearby.

Some artists make a career out of catching their viewers off guard. Last year New Yorkers were delighted to spot British graffiti artist Banksy’s protest art in Manhattan and Brooklyn. Two of Banksy’s murals appeared on the walls of an abandoned Mobil gas station in Midwood, a remote Brooklyn neighborhood that can hardly boast a thriving art scene or nightlife. Banksy, whose identity to this day remains secret, routinely finds ingenious ways to prank the art world and other power structures. Location nearly always plays a crucial role in this artist’s subversive statements.

Agora artist Ashley Morgan in collaboration with Le Sud Ouest & Griffintown borough in Montreal was selected to paint two pieces (front & back) on boards for display in a famous park. The works were housed in custom metal frames and on display from May 2018 – November 2018.

Further afield there are many experimental art spaces that push the experience of viewing art into exciting new territories. Galleries frequently support their artists in their efforts to explore a variety of spaces. Agora Gallery, for example, facilitates the relationship between its artists and hotels, which work with the gallery and actively try to bridge art and hospitality. Some alternative art projects and galleries harness hotels’ interest in bringing art to their guests.

New York City’s neighborhood Red Hook is home to another gallery space that speaks to transience. Fastnet is a gallery in a steel shipping container. Owned by James Powers, it originated as an alternative studio space in a city where art studios have become unaffordable. Now it regularly hosts beautifully curated, challenging exhibitions.

Whether you are looking to decorate an entire home, complete a room, or add vitality and professional credibility to an office space you will find the perfect piece on ARTmine. Need help? Contact us at [email protected]

Alternative art projects, DIY spaces, the internet as yet another site to display one’s art provide contemporary artists with more options than ever before. And, ultimately, the at times contentious dialog between artists and the institutions that promote and sell their art enriches art production itself. Our task as art lovers is to do our due diligence, to research and venture further afield to explore the full spectrum of what artists have to offer, from the gallery to the bottom of the sea.

If you’re the owner of a New York public space and would like to discuss the opportunity of showcasing contemporary art, don’t hesitate to contact us!

Maria Doubrovskaia is a visual artist and scholar. She moved to New York from St. Petersburg, Russia, when she was a kid. The Chelsea Hotel was seedy, and the Limelight was still a club back then. Maria loves cities and prefers slightly dangerous cities to glossy shiny ones. Some favorites are Naples, Palermo, Dakar, and Brooklyn before 9/11. If Maria was not a visual artist and a scholar, she would be an anthropologist.