The Story Behind #Americanoh, a Portrait Series by Zie Otto

“This young project is where I landed in my attempt to photograph those who had immigrated to the U.S. from countries in Africa and had integrated into the American ethos.” – Zie Otto

The work of photographer Zie Otto has been described as both nakedly direct and ambiguous. In his latest photography series, Americanoh, the artist, a Côte d’Ivoire native, explores parts of his subjects’ personalities and identities, allowing him to tell a story through their portraits. Learn more about his inspiration and the message behind Otto’s compelling, thought-provoking series of photographs. 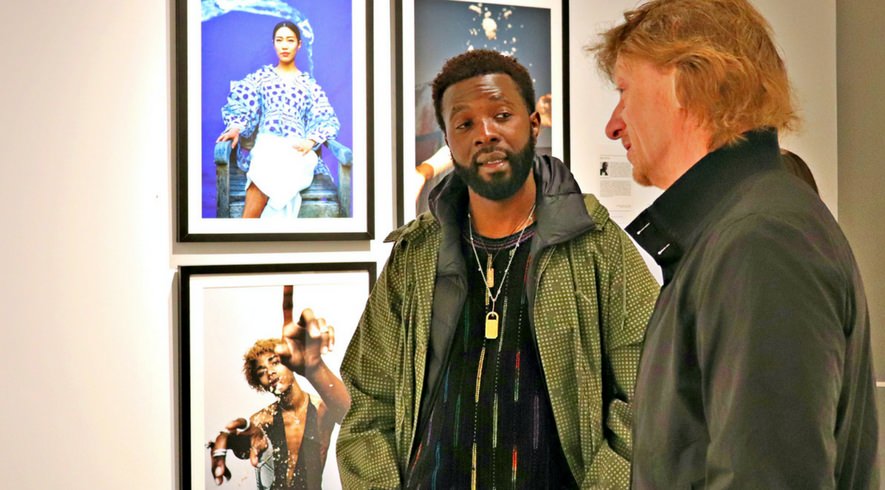 It seems that you are trying to send a very powerful message with your work. Tell us a bit about your artistic process.

There’s a lot I’m trying to say with ‘Americanoh’. This young project is where I landed in my attempt to photograph those who had immigrated to the U.S. from countries in Africa and had integrated into the American ethos. Therefore, they kept some parts of their cultural identity in limbo, regardless of which side they identified with the most. Those who came back to their second home in the U.S and still didn’t feel quite at home there either are part of my project, too.

In addition to photographing those folks, I wanted to find a way to comment on the misconception that everyone from the African continent came to America fleeing from a famine-ridden family, some sort of tragedy and distress, or a country at war. That’s not untrue for some, but I wanted to highlight the type of African immigrants to America I know, the ones I meet, the ones I’m surrounded by. Through the process, I had the sobering realization that ‘Americanoh’ will have to be a larger project and include immigrants from other sides of the globe as well; so many places have a word equivalent to what the term ‘Americanoh’ means for me in this series.

For those who may not be familiar, tell us about the term, or name, “Americanoh”.

‘Americanoh’ refers to those who moved to the U.S. and then, at some point, returned back to their homeland to visit or sometimes even to stay; it is used by the natives who never left to describe those who immigrated to America. I noticed that countries in Africa or even different cities in the same country have their own slang to describe those expats. I then found out that other places outside of the continent had a similar term which forced me to reconsider expanding the range of my subjects. Most of the time, the word is plainly descriptive and innocent and other times it’s used by the natives to make fun of their Americanized peers. In some places it’s ‘akata’, in other ‘khawaja’ or even a song — the “Yovo Yovo Song” is sung to a foreigner in Benin, so you don’t want it to be sung to you if you consider yourself from there. I decided the title of the series will be Americanoh instead of any of the other terms because it is the most fitting. Even other Americans can sort of guess what it means. The silent H at the end of the word started simply as a stylizing choice, but I quickly realized that it was a good choice because Americano without the “h” is widely used in the English language already. There are restaurants and hotels named Americano; we even have a cocktail with that name. I feel that ‘Americanoh’ completely describes what I’m making here. 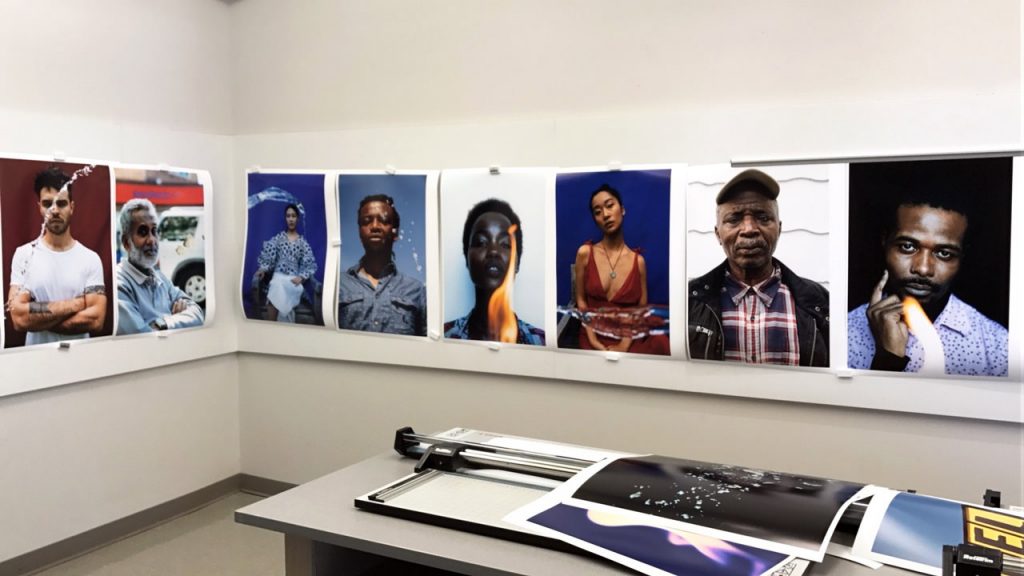 How did this series come about? What drew you to photograph Americanoh?

For years I wanted to photograph and share this series, but because it’s so personal, I wanted to make sure that the messages were presented as I intended. I wanted to photograph my subjects as they were without a big production around them in the process. As an Americanoh from Côte d’Ivoire myself, I am surrounded by many Americanoh’s and Americanah’s people living in New York. It was very easy for me to be inspired by stories of immigration; it is all around me.

Various elements appear in the series along with the portraits, such as fire, water, earth. Why incorporate these?

That’s where nature and ethos meet! There are a few reasons why I incorporate the elements. For my subjects, moving to America was a defining moment in their lives. The journey to America came with its sets of difficulties, failures, and successes (however they define it). I wanted to incorporate something that represented life. These elements that are so essential for life were exactly what I needed to add to the imageries. Besides being the most appropriate props for my series, it worked aesthetically! It was a new and exciting concept for me. Also, I pay a lot of attention to the type of energy people around me have and, therefore, which elements would be used for which subject. It’s a choice that happens right before I pick up my camera, when we’re done chatting. For instance, in “Americanoh-New Glory White Tina Fire” Tina walked right into the room and commanded it. She was fiery! That’s just her personality. If she’s not greeted in any room, she will introduce herself in one form or another. Of course the element I chose for her was fire. The process is very similar for everyone else.

We understand the series is in progress — that you’re still photographing Americanoh, and will be until it is complete. What will mark its completion? How will you know you’re ‘done’?

I find it very difficult to associate the word “done” with this series. The images on view at the gallery are just a fraction of what the goal for ‘Americanoh’ is. I think, perhaps when there’s a fuller picture of what I’m making, I can consider it done. I plan to start joining the images together to make some iconic American symbols. It’s good to note that the next batch of images that are coming from the series will be heavily focused on Pan-African subjects. And by that I mean those Americanoh’s and Americanah’s that are from the African continent or the African diaspora as a whole. Even after that’s done, the project won’t be completed. There are just so many other Americanoh’s out there! But focusing the next sets on Pan-African subjects will sort of drive the point home for those following my works or newly discovering them.

Americanoh is a series of portraits that can be appreciated individually, but how do you envision it coming together?

One of the things I’m really happy about and proud of is how these images stand by themselves, even without much context — the personalities are just enough. Picture this: a portrait of a man standing still and not being bothered by some water leaping in the air and splashing on his face, while his facial expression is not changed… it is interesting to look at, right? As interesting as the images can be by themselves, I see them all coming together and being appreciated on a whole new level when they become part of larger installments, by joining the works together and making iconic American symbols. 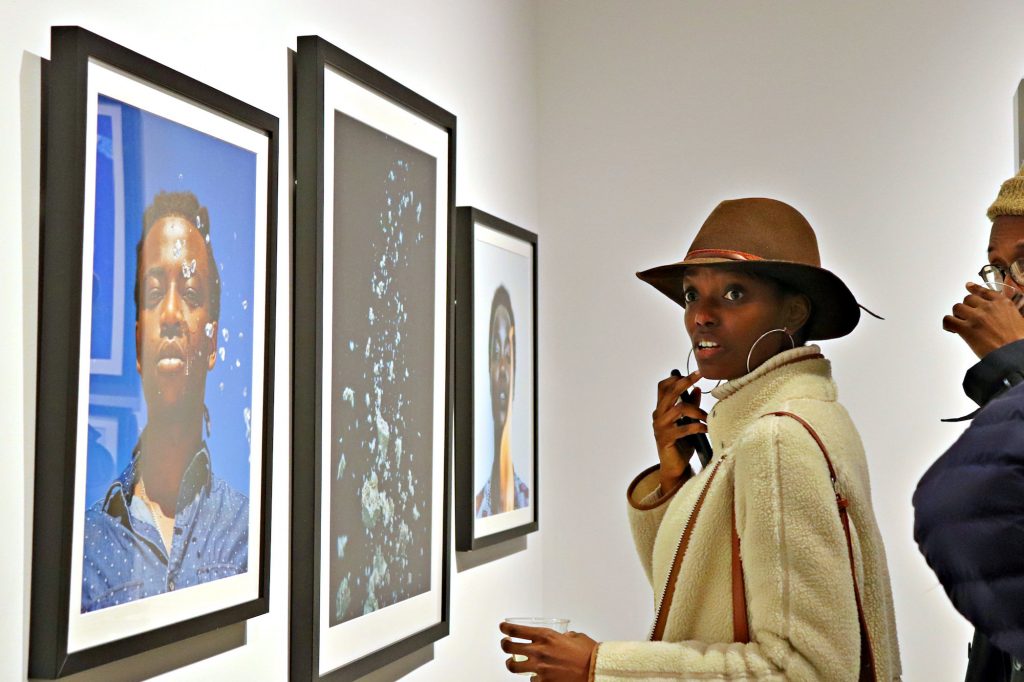 The backgrounds of the portraits are abstract, or nondescript. A solid color is more pronounced. Can you tell us more about that?

The background selections are part of it all. One of those American symbols I was referring to is the American flag. You can’t make the American flag without the red and white stripes can you? Some subjects are sitting or standing in front of a solid red muslin fabric for those red stripes.

How do you decide who to photograph? What draws you to that person?

Because so much of this art form depends on eye connection, a lot of times it just boils down to how they look. Eye connection is also the first and most common way we connect with each other as humans, so if they inspire me that way, I’m interested. I also love listening to stories. I think that’s why I loved history classes in school so much. If someone tells a good story, tells it well or with passion, they get my attention and inspire me to work with them too. I want to listen to them share their own story with me. It comes right back to the relationship — then, I can share their story through the portrait.

Collecting art is a highly involving and emotional experience. The artist’s process and intention are some of the factors that make one fall in love with his or her piece. Learn more about our artists’ creative methods and fascinating techniques in the Artist Spotlight categories.

Zie Otto’s works will be on view at Agora Gallery until 3rd of April, 2018. You can read more about Zie on his Agora Profile and view more of his works on ARTmine.